I am celebrating today ( Saturday 18th September ) as I have now transferred over all of The Dembe Diaries from WordPress to Blogger. So from now on I will just be posting on this site and then closing down the WordPress on when it comes to it's renewal date in January 2022. Thanks for sticking with us!

Today I managed to convince Jay to take Dembe to somewhere else on the common where he has never walked before. We managed to find it with the help of Google Maps! I didn't even know this place existed although I had seen some locals talk about it on a Facebook group. Daddy and Dembe had a lovely time exploring. 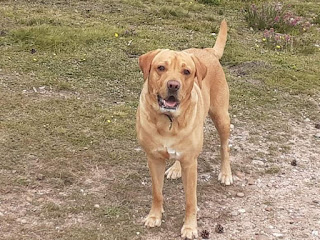 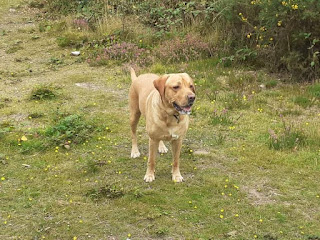 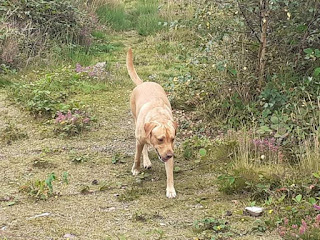 Jay took some photo's for me so I could see some of the walk. He also took a video for me.

It is another quiet week here whilst we wait for Dembe to have his X-rays on 29th September. Until then he is on very limited exercise, so there was no dog walk this morning. I have to say he is coping well with this sudden change in his routine. I am very proud of him.
I have been really useless at updating his paper diary this week. I have had a really rotten week health wise and have lost count at the number of migraines. So I am having to do this from memory.
Dembe decided to come and help me this afternoon as I tried to take some photos of my new Liberty wall hanging that I had created. 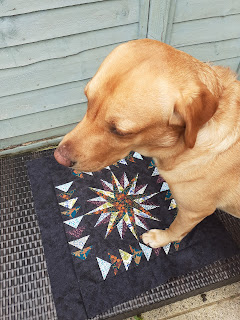 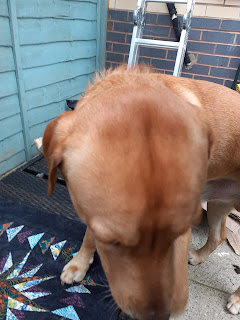 When I bent down to give him a cuddle I got a very wet soppy kiss!
I had to remove a load of paper from behind the wall hanging in the evening and Dembe was utterly convinced that I was hiding treats in the bag I was using for rubbish. He kept putting his nose inside and pulling it off the foot stool. 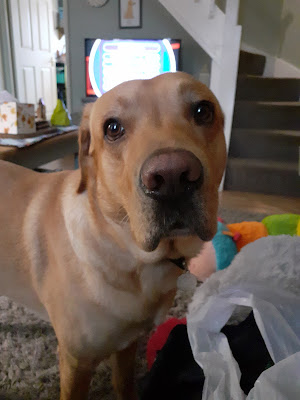 Jay was day off today so it was the Dembe and daddy love in that it always is on a Tuesday and Sunday!
I kept being brought find it bunny as a gift. 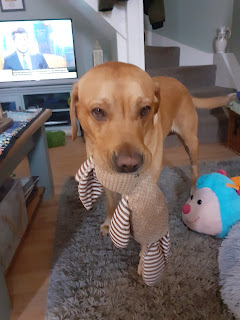 Jay was on a late night today, as Dembe is resting he doesn't have a walk booked. Jay ensured he had one walk on the common and then several walks around the block before he set off for work. Dembe was really good and settled on the sofa. 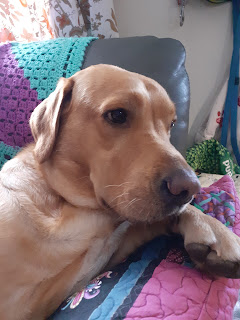 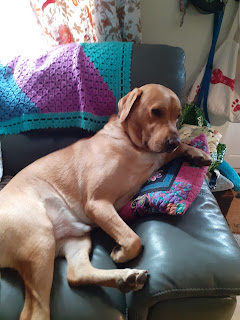 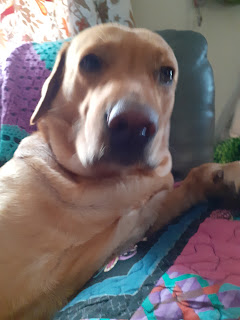 Jay popped back at 5pm and took Dembe around the block again. We were both really tired, Dembe and I, so we had an early night. 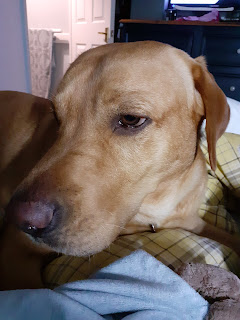 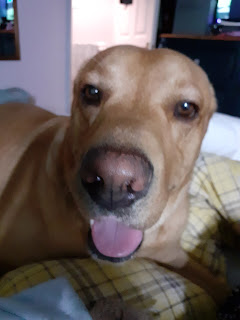 Dembe was sound asleep when his dad got in!

Jay is on his second late shift on the bounce today, so it is basically a repeat of yesterday!
Over the last couple of weeks or so we have been getting ready to switch Dembe over from the food I cook him and the kibble to raw or what is also know as Biologically Appropriate Raw Food. We have tried this before and it didn't go well as I rushed it. Dembe is a very fussy eater and these things need a careful handling and done much more slowly. We have been using raw beef mince, initially I started by adding a few teaspoons full to his meals. Then very slowly increased the amount until Dembe was happy to eat just raw mince on its own as a meal. I can't believe it but we have gone back to a dog that is waking me up to be fed and is polishing off his meals. I think he will always be fussy but at least this is much better for him that ultra processed kibble. 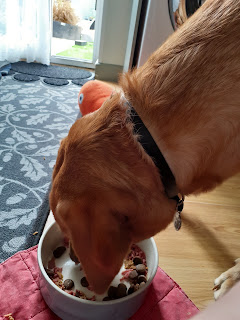 The meal above was part Kibble and part beef mince. He actively discarded the Kibble out of the bowl so that he could just eat the raw beef mince. 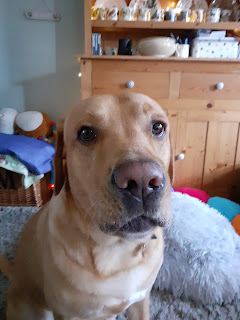 He was a bit of a demon this afternoon, barking a lot. The face of an angel and is actually the devil incarnate. He barks when he wants to go out to the toilet, he point blank refuses to use the garden which is silly when the door is constantly wide open.
We have noticed with having a higher meat content in his diet he is producing much less waste and his flatulence is almost gone. He could clear rooms previously with his windy pops! 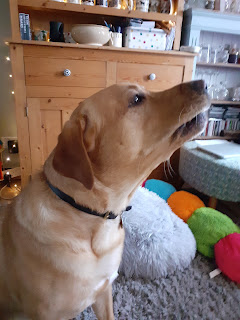 Daddy is on an early shift today so Dembe had an early walk on the common before Jay went to work. When I woke up Dembe was still downstairs asleep on the sofa. He was so excited to see me he brought me Cleo the Caterpillar.
I was feeling ropey so we didnt do much all day. Dembe slept a lot too. 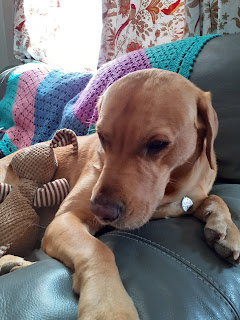 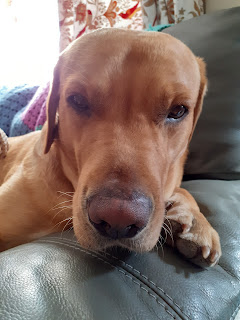 Well I finally managed to complete the move from WordPress to Blogger today. No more worrying about having it done before the blog  renews for another year. It was a mammoth task done over 4 separate sessions.
Jay is on a 9-6 shift today so Dembe had a walk on the common at 5.30am and then another walk before his dad left at 8am, around the block. I slept through all this having had a hideous nights sleep. I got woken up at 8.30am by Dembe standing in the bedroom door way wagging his tail so it thumped the door and him crying. I then got my first of many Dembe facials as we call them here when your face is completely covered in Dembe slobber! Expertly applied by his tongue! 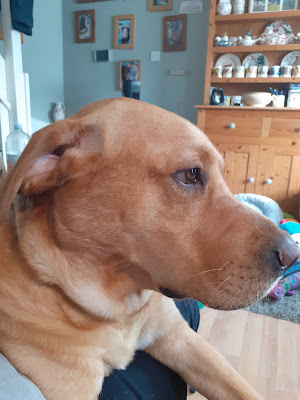 In between sorting out His Majesty's blog I have been ensuring that Dembe is kept topped up with his cuddles and kisses! 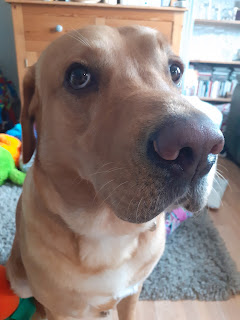 At a couple of minutes past midnight I was ordering his lordship a new bed as he has literally shagged the life out of the other one! 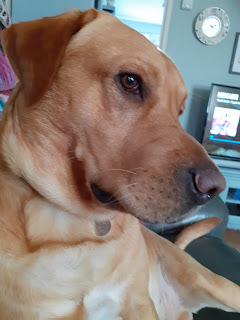 We are all looking forward to a nice quiet Sunday.
at September 19, 2021

I have been really rubbish at keeping Dembe's diary up to date this week. Think it was still all the stress from the vets the previous ... 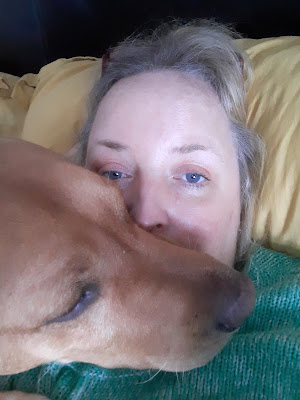