Dembe is shattered after the fun of agility training yesterday. Jay took Dembe out early, he is much happier about going out in the dark these days. Unlike when he was a pup and he would refuse to get out of the back of the car.

We had a lazy day together snuggled on the sofa. He was very pleased when Jay popped home for lunch . He brought a selection of toys into the kitchen for Jay to attempt to get off him. He likes greeting Jay with a toy in his mouth. If Jay comes in and he doesn’t have a toy, Dembe will run off and get one to show to his daddy. It is so very sweet.

He had a good walk when Jay finished work.

Jay is day off today and took Dembe for a quick walk up the common, quite early. He will be having a longer walk this afternoon whilst I am at Physiotherapy.

Jay went to Old Common whilst I was in my physio session. Dembe met lots of dogs and had several games of chase. He still isn’t keen on leaving me anywhere, he can get quite stressed out. By the time I got out of physio he was shattered.

I took this photo about 10 minutes after we got in. He was so shattered but he was determined to attempt to keep an eye on me.

We had dog training this evening – it was bloody freezing! I had so many layers on I could barely walk. Tights on under my jeans and 4 layers on my top half. Dembe had an excellent training session, he was the best in the class this evening even if I do say it myself. Unfortunately Max the GSD seems to have taken a dislike to Dembe and was growling at him. He decided last Sunday that Dembe was in his crosshairs and he seems to have continued this week. Thankfully there is plenty of space between them so Max can grumble all he likes.

We had a quiet day as Dembe and I were both pretty shattered after the dog training session last night ( plus I also had physio ) . He slept the majority of the day. He only came to life when Jay came home for lunch and again when he finished work.

Dembe started throwing his toys around the front room at about 5pm and kept that up until Jay arrived home just after 6pm.

He is eating really well at the moment and seems to be really enjoying his food.

I woke up with a migraine at 2.30am, so I got my soft collar on and dosed myself up with pain meds. Dembe was in with Jay so it didn’t wake him. I have to sleep sitting up when wearing the collar so I was propped up in bed when Dembe came in at 5.30am and started barking because he didn’t know who it was in the bed! Idiot. I calmed him down , he then jumped on the bed and covered me in kisses. I could feel that all his back hair was up. He settled down beside me and I stayed in bed for as long as I could. We managed to sleep until 8am which is unheard of. Jay took Dembe out at 6.30am but I slept through that.

We had a very low key day due to me struggling with the migraine all day.

I had a funny turn today where I came over like I was going to faint ( it happens quite a lot but usually I can just sit there and be ok) . My eyes started rolling in my head so I had to slip down off the sofa, get on the floor and raise my legs up. As I got down on the floor I was fully expecting Dembe to go mental as me lying on the floor is normally the signal for a mummy pile on and play time.

I was so shocked when Dembe quietly got off the sofa and curled right up beside me, resting his face against my face. Normally I would have been trodden on and toys dropped on my head. It was really out of character for him. When he wasn’t lying face to face with me, he was lying on my arm so I couldn’t get up. We stayed on the floor for 30 minutes before he moved and brought me a tennis ball. How did he know that was just what I needed? I sat on the floor for a bit ensuring I was ok to get up and then we both headed upstairs and lay down on my bed for a few hours.

As you can see from the photo’s I took at the time he was stuck to me like glue. He hasn’t been trained to do this, he picked up that something was wrong and then stayed on the floor with me until I was well enough to move. I am so very proud of my little pudding. He is my hero.

I am feeling a lot better today thank goodness, as Jay is late night so I will be on my own from just after 12pm until 10pm. Jay took Dembe out for a nice long walk to ensure he didn’t go too mental later with not having a second walk.

Crocodile was being thrown around the lounge along with tennis balls as he attempted to entertain himself. In the end I gave him a bulls tail chew to occupy him and bring the energy levels down. That worked and around an hour later we toddled up to bed where he settled down beside me immediately.

Dembe is full of beans this morning, despite having a lovely long walk with Jay first thing. I had to take my slippers off which is a rare occurrence as my feet were too hot. Dembe deciding that we weren’t paying him enough attention then stole them and sat chewing the labels out of them. He also seemed to spend a very long time just bathing in the smell of my feet, strange animal.

We had lesson 4 of Dembe’s agility training course today. He mastered the weave poles and the long jumps. He was the first dog to manage 4 jumps today.

Dembe has been asleep ever since we have been back.

I forgot to share, Dembe now knows that we don’t react to his barking and we have been teaching him the command speak and then cease – it’s been a bit hit and miss. So now as barking no longer works he has started howling. Little bugger.

This weeks Diary update won’t be in diary form as it will just be a round up of the last few weeks and will mainly be photographs.

On Monday 23rd December we were visited by Sam, Gemma and Sarah. Dembe was a good boy and behaved himself. He was spoilt rotten by Sam, who bought him some tennis balls ( they are still played with daily) a bone shaped chew and a tin of sardines which Dembe had for breakfast on Christmas morning.

On Christmas Eve it was just me and the boy as hubby was working for the first time in nearly a decade on this day. Dembe spent much of the day asleep on or near me.

Dembe was spoilt rotten Christmas day, he had his tin of sardines from Sam for breakfast and then he had all his presents to open.

This is just some of the toys he got. We got him a pop up tunnel which he went through twice on Christmas morning but has refused to go through ever since. He got a new food bowl, so many bags of treats, toys a new lead for his obedience training class. He really was a lucky pup.

However I think if Dembe could talk he would tell you the best bit of Christmas day was sitting on his dads lap having a cuddle.

It was a real Dembe and daddy love in. They couldn’t get enough of each other and it was really lovely to see. Whenever Jay is off work Dembe is glued to his side, yes he is my dog but he adores his dad as well.

Jay and I got a really lovely gift from Imogen, Leanne and Liam. A photograph of all the dogs together.

On Boxing day ( 26th Dec ) Dembe and I were both shattered, we had a very lazy day indeed. I think all the excitement and lead up to Christmas hit us both. We had lots of snuggles on the sofa.

Dembe managed to get in one last swim in 2019 up on Woodbury Common on 31st December. Jay didn’t have to coax him in, Dembe dived right in. He is a real water baby, he swims so well.

Red Dinosaur a Christmas present from his uncle Paul has been a firm favourite. This gets taken up and down the stairs on a regular basis. He loves carrying it around, when you try to take it from you he runs away. With me he knows all he has to do is run up the stairs and I can’t get him, he then pokes it through the banister! Sometimes he is just too bloody clever for his own good.

I can’t get over how grown up he looks in this photo. Where has my tiny pup gone? They grow so fast in the space of just a few months. He will always be our baby though no matter how old he is.

I woke up on Sunday night and found him lying in his bed with the fox blanket covering his eyes lying on his back with not a care in the world. Today was hard due to it being the first anniversary of Mollie passing away. We had a very quiet day at home.

He still loves nothing more than having a cuddle on my lap.

We had our first training session of 2020 tonight. Dembe has been bumped up to the advanced class as he is training at a much higher level. He was a little rusty, well Jay was for the first 20 minutes, after that they had a superb training session. He has made a new friend a little white dog think it maybe a Maltese or Bichon crossed with something maybe as it was too big and chunky to be a poodle but had the same curly hair. His new friend is called Rupert and he spent some of the class doing his silly come hither half bark / howls to get his mates attention. Martin has asked us to work together next week as both our dogs are picking stuff up quicker than the other dogs. Dembe was actually watching Rupert to work out what he needed to do. It amazes me how clever he is sometimes. He learned last night that us saying 2 to him also means leave. So we will be working on that this week when we do training sessions each day.

Tuesday 7th also marked the one year anniversary of us meeting Dembe for the very first time.

Saturday 11th January is Dembe’s Happy Gotcha Day! I can’t believe he has been ours for a whole year.

As we suffered a bereavement this week there won't be much of a Dembe's Diary this week. I will after this post be having a break ... 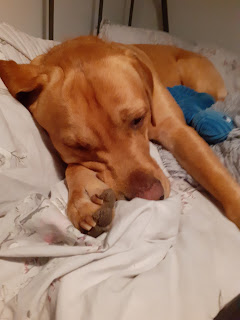